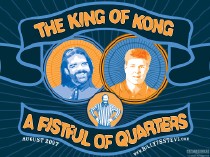 In 1982, Billy Mitchell set the Donkey Kong world record high score of 874,300. He quickly found fame and fortune when LIFE magazine splashed his face alongside those of other elite gamers considered the greatest of their generation, in a photo-spread in their January, 1983, "Year in Pictures" issue. Many felt his amazing score would never be bested. Then, in 2003, an unassuming science teacher from Redmond, Washington, shattered the long-standing record. In a video-taped performance, Steve Wiebe posted a staggering 1,006,600 points. But there was a problem: the score only counts if it's certified by Twin Galaxies, the self-appointed official keeper of classic video game records. And TG founder and "World's Video Game Referee" Walter Day puts it succinctly: "Twin Galaxies does a lot to promote Billy, because it's to Twin Galaxies' advantage — and very much to the whole gaming hobby's advantage — for Billy to become a star."

Mitchell, a larger-than-life character with a world-class mullet, is a hot sauce mogul and successful restaurateur from Ft. Lauderdale, Florida. He's also the self-proclaimed "World's Best Video Game Player". Unfortunately, in The King of Kong: A Fistful of Quarters, the new movie from director Seth Gordon (now in limited release), Mitchell comes off as something of a very big fish in a very small pond: in fact, the only thing big enough to match Billy's legend is his ego. Mitchell's opening line in the movie not only sets the tone for the upcoming competition between Billy and his challenger, lovable loser Steve Wiebe, but also gives us a fascinating glimpse into the psyche of an egomaniac. King of Kong is littered with priceless Mitchell one liners: "He is the person that he is today because he came under the wrath of Bill Mitchell"; "Since I so-called debuted on the scene at LIFE magazine in 1982… there hasn't been anybody who's played even close"; and "Maybe they'd like it if I lose. I gotta try losing some time." With a gaggle of video gamer disciples at his beck and call, including one who considers Billy "the champion" and himself "the prodigy", it's clear that Billy Mitchell is very invested in maintaining the mystique of his image. "Everything about him is perfect; Billy is just that person," proclaims one. Even Walter Day seems entranced by Mitchell's charisma: "There's no reason why Bill Mitchell couldn't end up on a Wheaties box someday."

The film begins as Billy waxes philosophic about the serious nature of professional gaming. "There will always be the argument that video games are meant to be played for fun… But competitive gaming… when you want your name written into history, you have to pay the price," he tells us. As this David-and-Goliath tale progresses, we begin to see just how seriously Billy takes his passion for gaming. When Wiebe submits a multi-hour video tape recording of his record-breaking game to TwinGalaxies, Mitchell dispatches his minions to the Wiebe residence to examine Steve's Donkey Kong machine with a fine-tooth comb, looking for any evidence of tampering. When a box carrying a mailing label with the name Roy "Mr. Awesome" Schildt, is discovered in Wiebe's garage, Wiebe's score is declared invalid. Mr. Awesome hates Billy and TG, and the feelings are mutual. The reasons for the animosity are never exactly clear, but the bad blood goes back decades, and involvement with Schildt is apparently enough to cast a pall of suspicion over Wiebe.

When Wiebe shows up in person at the Funspot arcade in Weirs, NH, and enters the 2005 International Classic Game Tournament to defend his title and his reputation, the Billy Mitchell PR machine kicks into high gear, as he and his disciples begin to play mind games with Steve in an effort to derail him. As Wiebe and Mitchell-acolyte Brian Kuh share a two-player game of Donkey Kong, Kuh tells us what a competitor Billy is and talks about the psychology of competition. He makes it clear that he is no friend of Steve. Later, when Wiebe approaches the rarely-reached "kill screen", the random point in Donkey Kong at which the machine's memory overloads and Mario just up and dies and the game ends, Kuh begins to gather the other gamers in the arcade around Wiebe and the pressure builds. Steve, however, thrives on the attention, and as the game ends at the coveted kill screen, the disappointment in Kuh's voice is obvious; Steve Wiebe is only the second person known to have reached the kill screen, and the first at Funspot. Again breaking Mitchell's record at the Funspot tournament, Wiebe racks up an impressive 985,600 points.

Mitchell himself, of course, is above making an appearance to take on Wiebe in person, despite repeated calls requesting a head-to-head competition. He instead submits a tape to be played shortly after Wiebe breaks Billy's record. The contents of the tape? A recording of a game Billy apparently played several years ago and never submitted, of himself beating not only his own record, but that of Wiebe's new mark as well. The tape, after a brief discussion with Mitchell, is declared official. That it contains "static" that on several occasions obscures the score, and that the score appears to "jump" in at least one place, is questioned by referee Walter Day but ultimately overlooked. When Wiebe asks to view the tape — he was busy playing Donkey Kong when it was shown — he is told by Kuh that no, he can't. It was apparently a one-time-only screening. A good portion of The King of Kong seems to be dedicated to questioning such lack of live performance; even Billy's wife hasn't seen him play. This is an interesting turn of events, considering Billy's stance about playing live: "To me most importantly is you travel to a sanctioned location like Funspot. That makes it official."

Later, at a tournament to earn a mention in the Guinness Book of World Records, held in Mitchell's home town, Billy finally shows but not to compete. Instead, his psychological warfare continues, as he fastidiously avoids Wiebe, passing only close enough to comment, "There's certain people I don't want to spend too much time with," as Wiebe plays. In fact, we never see Mitchell play during the film.

When Wiebe shows up at Billy's restaurant, Rickey's, where the other gamers are enjoying a break from the frenetic activity of the arcade, he is shunned. Ignored, Steve finds himself sitting alone at another booth, looking for all the world like a man whose dog just died.

While The King of Kong wraps up with more questions than are answered during its 87 minute run, the real-life drama between the two gamers has continued beyond the end of the film and has spilled over into the classic gaming forums across the web. The high-score title has since changed hands several times, and Twin Galaxies and Billy have distanced themselves from the movie over what they consider unfair portrayal of their involvement in the competition.

Steve Wiebe's young daughter has perhaps the best perspective of everyone in the piece, when she quips, "Some people sort of ruin their lives to be in [the record books]." In the end, The King of Kong, despite its obvious set-up of Wiebe as the everyman hero and his adversary as a Machiavellian jerk, is a rollicking tale of heroes and villains, kings and contenders to the throne. Told with just the right amount of irony — this is, after all, two grown men engaging in psychological warfare over a twenty-five year old video game score — Gordon's story is preeminently watchable, and completely enjoyable.