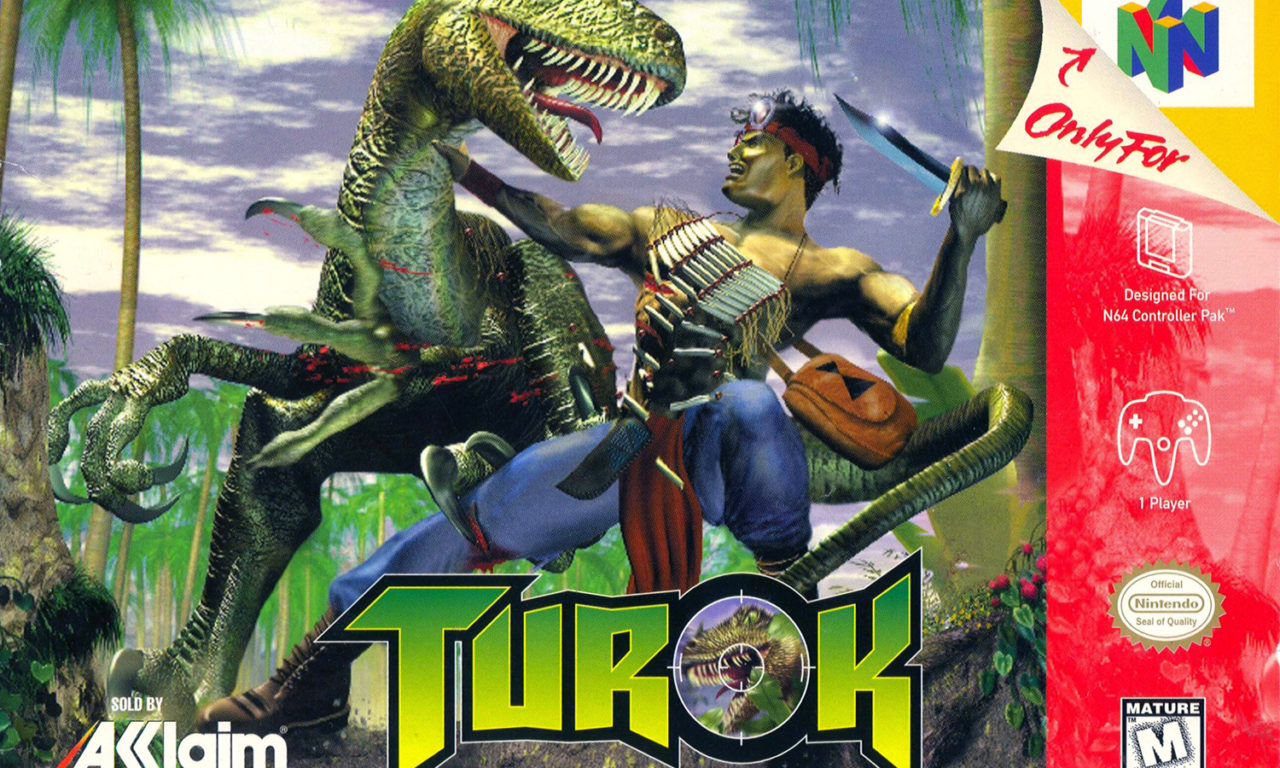 Acclaim's first entry into the 64-bit market takes the already-old genre of DOOM and brings it up more than a few notches. Turok: Dinosaur Hunter is a savage yet satisfying shooter for the Nintendo 64.

Based on the comic book series by Valiant, Turok is the guardian of the Lost Land, a limbo populated by all sorts of exotic creatures: dinosaurs, natives, robots, and aliens. Eight worlds wait to be explored from a first-person perspective in a search for keys and fragments of the Chronoscepter, a powerful artifact which can be used for both good and evil.

The first noticeable aspect of the game is its control. Almost every button has a function, even if they can't be reached. Turok can look in one direction while moving in another. While this takes some getting used to, it proves to be extremely effective in hunting enemies and making precision jumps. A running jump onto a wall of vines to climb while looking down below at the recently-thwarted enemy is entirely possible.

The reason for its "Mature" rating will soon be apparent. Foes don't just drop or disappear when shot; they suffer agonizing wounds and fall into their death throes as blood spurts out from where an arrow is lodged in their necks. The blood can be enabled as red, green, or disabled, but no matter how you color it, this isn't Mario.

The graphics make use of Nintendo's 64-bit processor. Fog effects with 256 levels of transparency and various lighting sources keep the Lost Land as mysterious as its name. No matter how close the enemy gets, they never appear blocky, only more detailed. Everything is as smooth, texture-mapped, and well-animated as it should be.

The music usually stays in the background, changing moods with the several areas. It does become noticeable when the time calls for it, heightening the mood and creating a more authentic atmosphere. The calls of the wild surround Turok; the sound of the natives' feet pounding the ground often gives away their location and number.

At a simulated five million square feet, the world of Turok is massive – sometimes a bit too much so. Several necessary areas have no discernible access point, and hidden items will only be found after several careful examinations of the level. Enemies tend to regenerate out of nowhere, an element of surprise which keeps ammo and health low. Their abilities to see, hear, climb, fly, and swim make them even more dangerous. Turok is a quite a challenge. Fortunately, save points allow for continued playing, if a memory pack is available.

Turok proves that the Nintendo 64 is not only a kid's system. It has plenty of eye candy and great control with some innovative features with a challenge level which will keep players coming back for more, if they don't become too frustrated.

This article is copyright (c) 1997, 2007 by Ken Gagne. All rights reserved. Not to be distributed without permission.