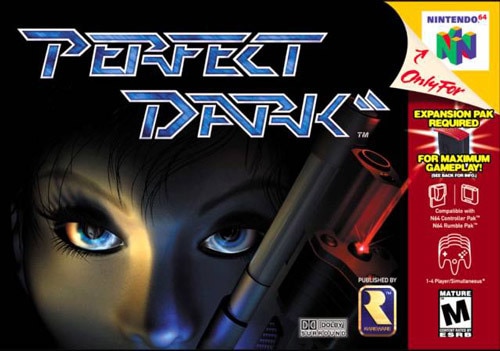 The truth is out there.

It is the near future. The elite Carrington Institute suspects the dataDyne Corporation of having dark dealings with visitors from another world. The highly skilled Joanna Dark has been assigned to infiltrate their outposts and determine the nature of these operations.

Developed by Rare, the makers of Goldeneye 007, Perfect Dark is an engrossing first-person shooter that is a perfect mix of espionage and action, with one of the best multiplayer modes to ever grace the Nintendo 64. Players will enter 17 new levels with 40 weapons, executing a variety of covert tasks and, when stealth fails, enemies.

Perfect Dark requires the RAM Expansion Pak (sold separately). Only a handful of two-player modes are available without the pak; the game is hardly worth playing without it. Game data can be saved either directly to the game cartridge, or to a Controller Pak. The Rumble Pak is also supported.

Players exploring Joanna's world will see a lot to like. The hi-res graphics mode is beautiful, but sometimes slower than the standard mode. Extensive — sometimes excessive — lighting effects make the details of each level clearly visible. Fallen enemies leave blood splattered on the wall and floor, with neither the stains nor the bodies fading quickly. Extra details aren't just eye candy, either. You can find a fight by watching for the flash of gunfire, or follow a trail of blood to wounded and fleeing prey.

The audio is also impressive. Enemies shout warnings, issue threats, and scream and curse (when the language filter is disabled, quite vulgarly) when killed. The sound of Joanna equipping and employing her weapons is realistic, befitting a force to be reckoned with. The mission briefings are sometimes hard to understand, but mission objectives can be read when the game is paused, so essential details are seldom missed.

If you haven't realized from the graphical and audio features, Perfect Dark is rated for Mature audiences of 17 years and older only. The level of realistic blood and atmosphere makes this a game you don't want your children playing.

Of course, presentation matters little if the gameplay isn't up to par; it's what kept Goldeneye on the best-seller list years after its release. Perfect Dark not only meets the standards of its predecessor — it exceeds them, dethroning Goldeneye as one of the best party games of all time.

The solo mode is excellent, but the multiplayer "combat simulator" is what will keep players coming back. Computer-controlled characters called "simulants" can be added to one to four human players, in teams of humans vs. simulants, human-simulant mixes, and more. Conditions for victory can include free-for-all, hacker central, capture the flag, and king of the hill. Three classic Goldeneye arenas are among the many new and hidden levels in which combat can be waged.

With so many weapons, styles, modes, simulants, and levels, the ways Perfect Dark can be enjoyed with friends are nearly limitless.

The solo missions can also be tackled with friends, either cooperatively or competitively, though these modes are not as interesting as the combat simulator. More entertaining are the Challenges, for any number of players. Challenges place players in a combat arena against varying numbers and degrees of simulants, with conditions for victory. Early levels could be "Free for all against an easy simulant," with later levels being "King of the Hill against expert simulants, one hit kills, no shields."

In any case, the enemy AI is smarter than ever. Soldiers will retreat to sound an alarm rather than fight, or will lure Joanna into a situation that favors the enemy. It's not uncommon for a simulant to sit in waiting for a player to stumble into its trap.

The control has a few added features, including secondary modes for weapons and a quick-select weapon menu. Basic functions, such as running, strafing, and aiming, remain precise.

When you're done running Joanna through her paces, grab some friends and keep going. A game this good just can't be put down.

Is Perfect Dark truly perfect? No.

Should you care? No. It doesn't get much better.

This article is copyright (c) 2000, 2007 by Ken Gagne. All rights reserved. Not to be distributed without permission.