Gamebits produces game developer interviews, unboxing videos, and Let's Plays. I love and feature many kinds of games, from the mainstream to the niche and quirky, but I tend to focus more on indie games, with their focus on storytelling and creative gameplay. Instead of triple-AAA titles such as Halo, Mass Effect, Skyrim, and Minecraft, here you'll find narrative-driven Steam titles, classic adventure games, and innovative mobile apps.

The name "Gamebits" comes from a weekly newspaper column I wrote from 1997 to 2003. At the time, it was my first professional writing experience. The editor was taking a chance on me — and what's another name for a chance? A "gambit". Hence was born Gamebits, which has since evolved from print to digital media.

When the rise of the Internet led to the decline of the printed newspaper industry, Gamebits went on hiatus while I focused on magazine editing and digital publishing. I brought those skills back to gaming on November 18, 2012, when I shot a day-one unboxing of the Nintendo Wii U that went viral. That experience reminded me of what I once loved about gaming and gave me the enthusiasm, tools, and audience with which to relaunch Gamebits for a new generation.

I'm the host of Polygamer, a biweekly podcast of equality and diversity in gaming. Each episode features an interview with marginalized voices in gaming about the work as community leaders and industry insiders.

I also co-host Transporter Lock, a Star Trek podcast. Join me and co-host Sabriel Mastin of Overwatch show Pulse Bomb Ready as we review each episode of Discovery!

I also once hosted IndieSider, a series of exclusive interviews revealing the creative process of the developers, designers, artists, and musicians of the gaming industry's latest console, mobile, and Steam titles. IndieSider aired every first and third Wednesday, 2014–2017, as an audio podcast and paired with gameplay footage on YouTube.

I'm Ken Gagne, a gamer since the Atari 2600 and Apple II. In 1990, I entered the Nintendo World Championships in Worcester, Mass. — the same day and place as Cliff Bleszinski, who later went on to create Gears of War. My fate was far humbler: I placed second in my age bracket. I've since owned every Nintendo console as well as the Sega Saturn and Dreamcast, the 3DO and Atari Jaguar, the Virtual Boy and Wonderswan, and the Xbox 360 and PlayStation 4, among others.

I've long been a gaming community organizer and content developer. I was the community manager (sysop) of the Video Gaming Central Forum on CompuServe (1994–2004) and of the Gamebits forum on Syndicomm Online (2001–2006). I have been a member of the press since 1997 as a reporter, editor, and freelancer, having been published in such outlets as Computerworld, PCWorld, ITworld, and TechHive. I'm also the editor-in-chief of Juiced.GS, the last remaining print publication dedicated to the Apple II computer. I have spoken at conferences in Boston, Denver, and Kansas City on such subjects as podcasting, retrocomputing, crowdfunding, and WordPress.

Interviews are recorded with a Logitech USB H530 headset, Skype, and Audio Hijack Pro; edited with Audacity, Levelator, and Apple Podcasts; published with WordPress and Blubrry; and hosted with DreamHost.

This site uses the Focus theme for WordPress hosted on DreamHost. The site's content is created and maintained using such software as BBEdit, MarsEdit, GraphicConverter, Transmit, and Chrome.

I actively support video games on on Kickstarter and Patreon; my profiles and the projects and artists I've backed are public. Any potential conflicts of interest will be cited in the associated blog post and/or podcast. Most Steam games are provided to me by the developer. Amazon links are likely to be affiliate links.

Gamebits is an independent publication that is not affiliated with Polygamer.com, Less Than or Equal, Open Apple, the Retro Computing Roundtable, the Polygamerous podcast, my employers, or any other organization. The views and opinions expressed on this show are solely those of the hosts and guests and do not necessarily reflect those of their colleagues or employers. 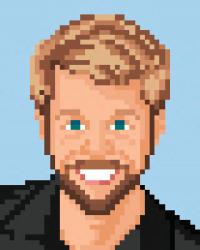