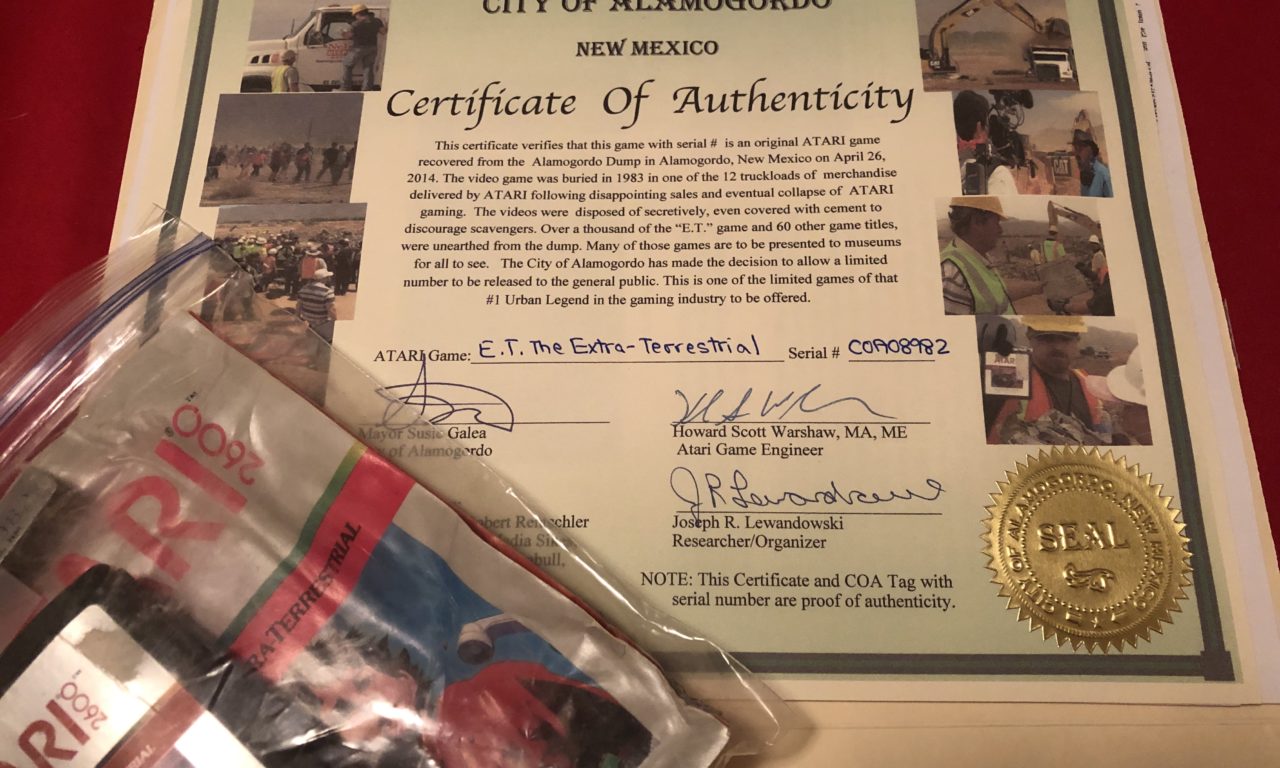 The hardest things for me to give away

Three objects in particular were almost painful to give away due to their value and rarity.

Every time I move, I give away stuff that I no longer need. In preparation to nomad, I underwent my biggest purge yet, giving away possessions I'd always clung to in previous purges: books, movies, furniture.

But there were three objects in particular that were almost painful to give away due to their value and rarity. All three now belong to the Strong Museum of Play in Rochester, New York.

In 1983, Atari flooded the video game market with E.T. the Extra-Terrestrial, a low-quality Atari 2600 game based on the Steven Spielberg movie. Its poor sales contributed to the video game crash of 1983, nearly wiping out the entire industry. Stuck with millions of unsold copies of the over-manufactured game, Atari allegedly plowed them into a landfill in Alamogordo, New Mexico.

This legend became factual history in April 2014, when a documentary crew unearthed the buried trove.

The games remained the property of the city of Alamogordo, which donated several copies of the game to museums and put others on eBay — where I bought one. It was July 16, 2015, when I interrupted a session at KansasFest with an exclamation that I had won the auction… for $510.

Over five hundred dollars for a literal piece of trash that had been buried under tons of garbage in the desert for 31 years.

When the USPS Priority Mail box arrived, I never even opened it, wanting to preserve it as much as possible. Four years later, when I was moving out of my apartment, it remained unopened. I decided this piece of history wouldn't do anyone any good sitting in a storage unit, so I offered it to The Strong, home of the International Center for the History of Electronic Games. They already had a copy on display, but just by being exposed to the light, it would degrade. They accepted mine, promising to rotate between their two copies.

I've donated hundreds of artifacts to The Strong before, but never one so expensive or rare. I asked if this one would be displayed with a placard indicating it's from "The Collection of Ken Gagne". It will.

Ouya was a video game console that was crowdfunded on Kickstarter in 2012 and released in 2013. It was discontinued in 2015.

Another Kickstarter campaign that ran within the Ouya's lifespan was LeVar Burton's Reading Rainbow. I backed it at the $250 level, which included as a reward:

The OUYA + RR GAME CONSOLE Package /// Created as a one-time exclusive with a new "SKY BLUE" color just for this campaign, this Android-based game console and controller are a great way to bring Reading Rainbow — and hundreds of games and apps — to any HDMI-enabled screen. Plus, if you get this reward package, your OUYA will come HAND-SIGNED BY LEVAR. ONLY 500 AVAILABLE AS REWARDS.

Not enough people chose this reward to justify manufacturing such a limited edition. I still received an Ouya, and it was autographed by LeVar Burton, but it was otherwise the same model Ouya that one could buy off the shelf — except it was unique, being a standard Ouya that was supposed to be something more.

It sat in its original box next to the E.T. cartridge until I offered it to The Strong.

The Women of NASA LEGO set

My friend Maia Weinstock is a tireless advocate for recognition of women scientists. Not only does she create and edit Wikipedia pages for this underrepresented demographic, but she also makes LEGO mini-figures based on them. In 2017, her petition to create a Women of NASA LEGO set was accepted, commemorating Margaret Hamilton, Nancy Grace Roman, Mae Jemison, and Sally Ride.

I was invited to the release party in Somerville, Massachusetts, where I bought two of the LEGO kits: one for my niece, and one for myself. The latter I had signed by Hamilton and Roman, who were in attendance. (Just over a year later, Roman passed away.)

While my niece loved her set, mine sat unopened—truly a collector's item. But with The Strong Museum of Play having recently hosted the exhibit "Women in Games", I knew they would be a better home for it. I asked if the kit would would be more valuable if Maia also signed it, and they enthusiastically confirmed it would. So, one more signature later, off to the Strong it went.

The hardest part of letting go of treasures is finding a good home for them. In this case, all three went to The Strong. I couldn't be more confident or at ease knowing where these artifacts are in the right hands.