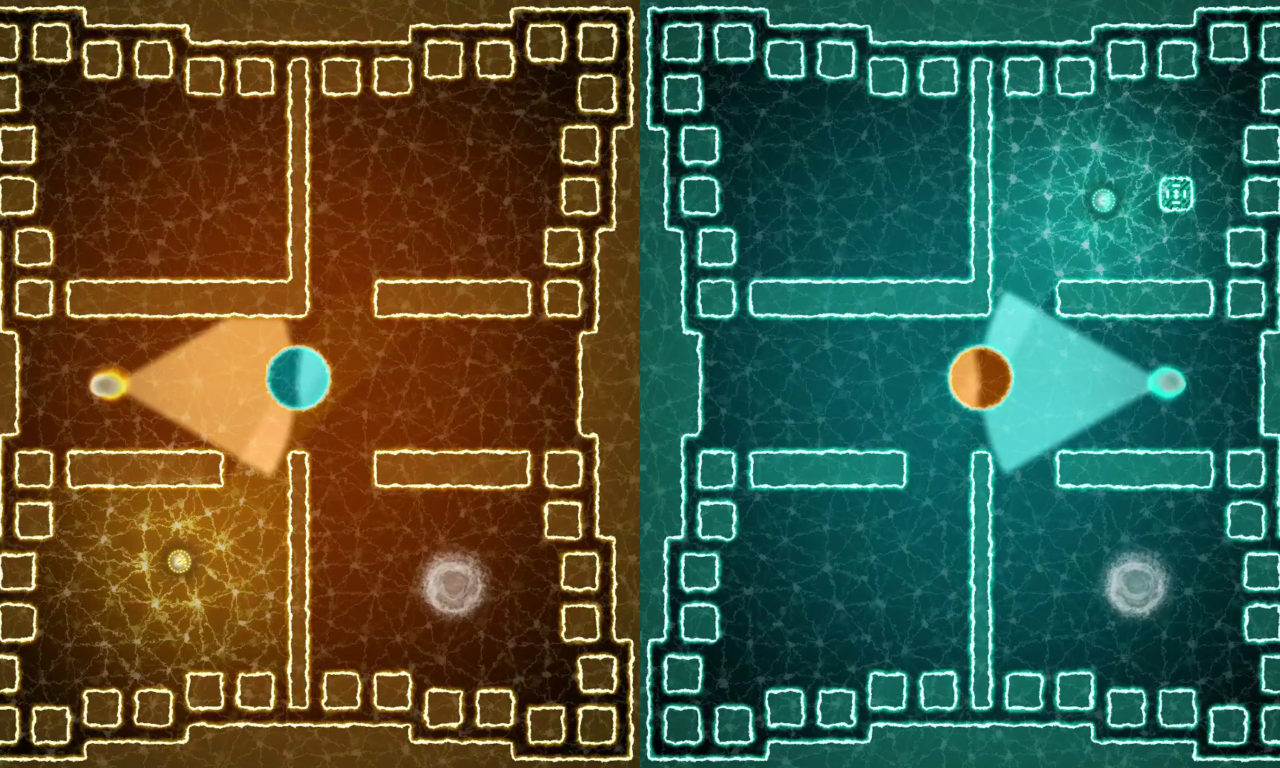 Does the left hand know what the right hand is doing?

I gravitated to Semispheres as soon as I saw it. A meditative parallel puzzle game from Vivid Helix for PlayStation 4 and Windows, Semispheres requires the brain's two hemispheres to take different actions toward the same goal. On the PS4, the DualShock 4's left analog stick controls an orange sphere that's constrained to the left half of the screen, while the right stick controls the blue sphere on the right. The screen's two halves consist of mazes with matching layouts but different inhabitants: sentries, traps, and power-ups must all be navigated and exploited to guide the spheres to their goals. But what happens on one side of the screen can affect the other, requiring the two halves to work in tandem. It's like playing in the Light and Dark Worlds of a Zelda or Metroid game, except simultaneously.

The color scheme and dual nature of Semispheres immediately reminded me of Torpex Games' Schizoid, one of my favorite indie games for the Xbox 360. It too used dual analog sticks to control orange and blue characters, except Schizoid was more of an action title focused on eliminating color-coded enemies.

Unlike Schizoid, which offered both two-player and AI-assisted modes, Semispheres is exclusively a one-player game. A creative setup can make it suitable for two players, though: by getting cozy with a partner and one controller, I was able to play with my left hand on the left stick and their right hand on the right. The amount of communication and timing necessary to solve the games puzzles ultimately may've made playing the game this way harder!

Still, I'm surprised more play modes aren't an inbuilt option. With the Xbox One's new "co-pilot" feature, or with the Nintendo Switch's separable JoyCons, Semispheres could be easily adapted to multiple players on other platforms. While it does result in a significantly different experience, I found it a useful option to have.

But even in the intended one-player mode, Semispheres is a fun puzzle game. Many levels railroad the player into the only solution available, but these early levels are usually designed to introduce new concepts or mechanics. Later levels open with a daunting degree of complexity, but through experimentation (the game grants infinite lives) and some ingenuity, the path becomes clear.

Semispheres is an innovative puzzler with an unusual control scheme that I haven't seen since 2008's Schizoid. I enjoyed realigning my brain's neural pathways with less stress and more contemplation than its spiritual predecessor demanded.