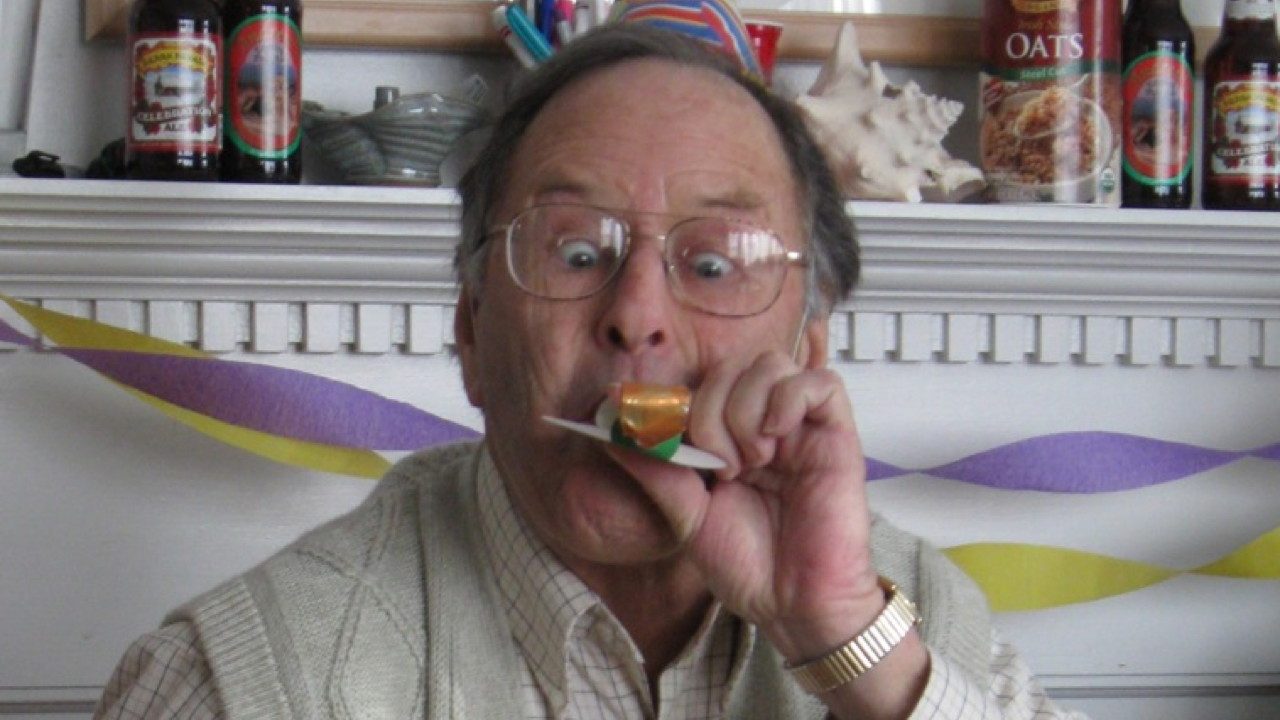 My dad, Edward F. Gagne, made me the gamer I am today, as seen in this YouTube interview for Father's Day.

When I think back to my childhood, there are two things I don't remember ever not having: an Apple II, and video games. From computer games like Castle Wolfenstein and Choplifter to Atari 2600 classics such as Space Invaders and Adventure, I've always been gaming.

Having such entertainment opportunities is typical in the modern household — but thirty years ago? It was almost unheard of. Who decided I should grow up to be a gamer?

The answer is my dad — and to commemorate Father's Day, I found out what makes him the family's original gamer.

I'm so grateful my father gave me this opportunity to interview him. The subject matter may not be so serious, but it answered some questions I'd always had, like: how did we end up with a pinball table in the basement? (It was Gottlieb's Spirit of 76, if you were wondering.) Why don't you game much anymore? These questions were always in the back of my mind but never important enough to ask.

When I asked Dad if he had any specific memories of me growing up playing games, I thought he might remember how I excitedly relayed to him every plot point of the original Final Fantasy, one of my first RPGs, as I encountered them. Or how he accompanied me to the Nintendo World Championships in 1990, where I placed second for my state and age group. Instead he abstracted out the concepts of what made me unique in a family of gamers. I could never dominate an arcade machine like my brother Dave could with Q*bert and Pac-Man, but it's true that I really appreciated the context and minutia of these imaginative worlds, which I don't think I ever consciously was aware of until my dad said it on camera.

I suspect Dave is more like my father than I am in that regard. My father has always played games obsessively, fixating on a single game for years or decades before moving on. I can remember him playing only Snake Byte, Pac-Man, Centipede, Tetris, Dr. Mario, and Tetris Attack. I used Creative Commons videos or Virtual Apple II to capture demos of these games to include in the video.

So thank you, Dad, for this opportunity to remember that the apple doesn't fall far from the tree. Happy Father's Day!

I wouldn't be the gamer I am today if it weren't for my dad.

I probably started going to arcades when they had them as pinballs. You had a few pinball machines in establishments, like a little neighborhood bar or something like that, but not a place that was purely dedicated to games of pinball machines exclusively.

My father, Ken's grandfather, owned a building that was occupied by different retail tenants. One of them was a nice upscale, if you would want to call it that, bar. As times changed, people's attitudes changed, this place closed down. They just walked away from it all.

Here were these — I think there were four different types of pinball machines. The company that owned them came and contacted my dad to have access to go in and pick them up and take them back. I asked one of them if they were for sale. He said, "Sure. We deliver these to households all the time. We maintain them."

Anyhow, I bought it from them and had them install it in the cellar of my house. They were true to their word. If something short-circuited or didn't work anymore, they'd come right in and fix it. Not only that, as time went on, they would even swap it out with a different one for me at times. Our whole family enjoyed that also.

The first video game that I ever encountered or played was from an old Apple II. It was like a worm, where you would press different keys to make it turn and go in through a maze. It would get to be continually longer and longer, the more you played.

I've got the Atari for myself and my four sons. We all played with it, to one degree or another. We used to fight for time on it, but they usually had it all during the day because I'd be out working during the day. When I'd come at home at night, after I'd relax a little bit, that was another form of leaving the day behind me.

I did start off playing Pac-Man. That was a very good game. I thoroughly enjoyed it for a while. Then as they progressed and improved, they came out with Tetris. Unlike Pac-Man, which was just repetitive, the same thing over and over and over, whereas Tetris, I don't get bored with it.

Its value to me is, it gives me the opportunity as it did right from the beginning to shut out everything else that I do for so-called work in the course of a day or a week or a month, and just concentrate on playing.

My oldest son David had, let's say, a fixation with one game. He would put a quarter in. He could monopolize a game all day long. He was the oldest. We'll skip the middle, and go to the youngest.

He would really get into all aspects of a video game. He would dissect it right down to its entertainment value, its scary value, its realism. He couldn't wait to get a hold of a new game or a new system, just in order to dissect that one also.

Like a person that can't wait…he would say that he's a mechanic, "I can't wait to get a hold of a new engine to break it down and put it back together." Ken was the same way with gaming systems, and with the games that would be made for those systems.

As far as game systems having a negative effect on our family's outlook or whatever, taking up too much of their time, I never really gave that any thought because you could say the same exact thing about anything in this world, no matter what comes out new.

When they first came out with comic books when I was a youngster, people were saying, "They're going to ruin your kid's mind. Don't let your son play with it." As things came along…there was even books that they tried banning from being put on the bookshelves, and so on and so on like that.

As far as game systems entertainment, that never entered my mind. I think that the end results have borne me out correctly that there isn't…yes, our kids, our family went through phases, each in their own time. They passed into it, they passed out of it. That's all.

I have not played a game in about two years. When I would be doing a lot of paperwork for our family business, at some point, usually after about three hours, all of the numbers and everything would start to blur together.

I would just stop, put everything down and go play a video game. I've backed off from the business in any active capacity. Therefore, the need to get away from or have a change of focus from business to pleasure hasn't been that great. I do an hour or so of paperwork, then I stop. I actually have to rest.

Tech specs: this video was shot with a Canon EOS Rebel T2i DSLR and RØDE VideoMic mounted on a Manfrotto MA7301YB 7301YB tripod. The scene was lit with two Bescor LED-500K lights, and the footage was edited in Final Cut Pro X.