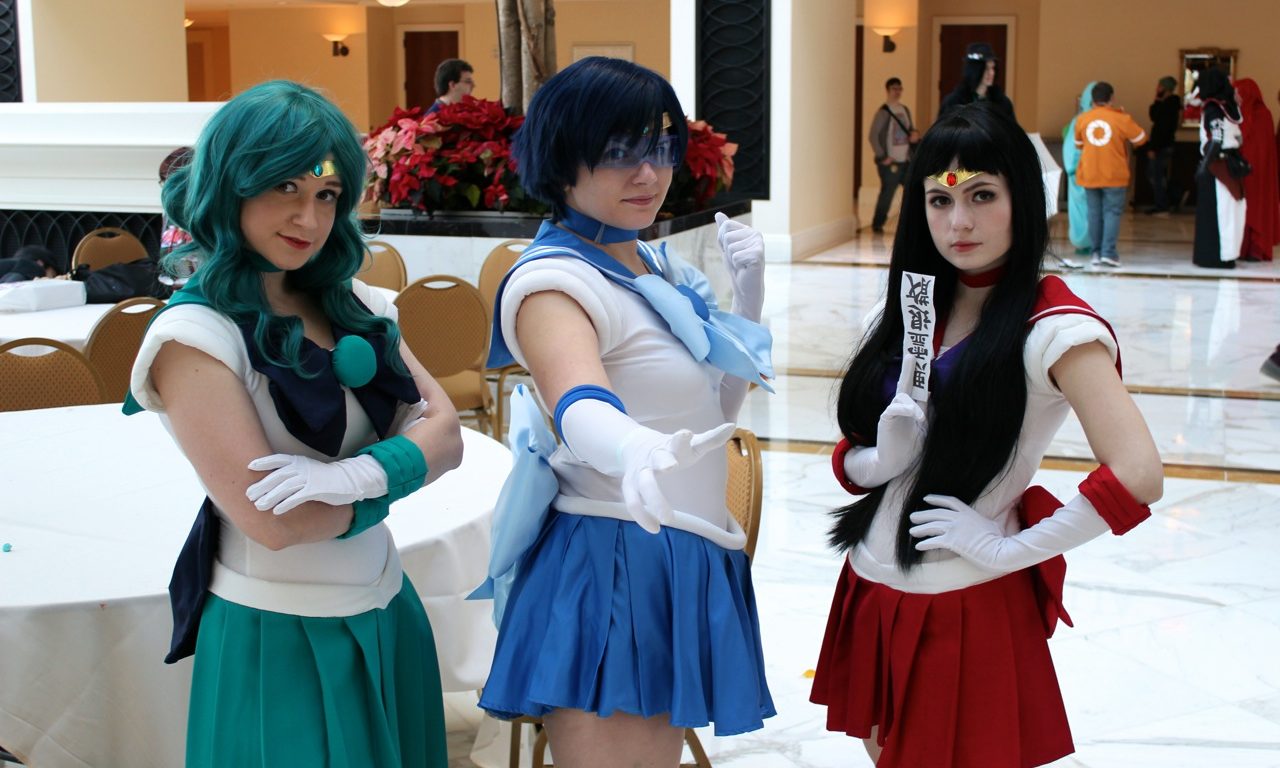 MAGFest 12: A festival by and for gamers

MAGFest — originally the Maryland-Area Gamers Festival, now the Music and Gaming Festival — celebrated its 12th annual gaming convention this month. As a veteran of E3 and PAX East, I decided to attend my first MAGFest in 2014. The show started on Thursday, but as I was flying solo and unlikely to have as much fun as I do when I have my crew with me, I scheduled my arrival for late Friday, giving me that evening, all of Saturday, and the half of Sunday that is the closing hours of MAGFest. Unfortunately, a New England nor'easter delayed my flight by 12 hours, not getting me to my hotel until 2:30 AM Saturday.

Even at that hour, I could tell I'd arrived in the right place: both within and without the hotel lobby, dozens of colorfully clad conventioneers and cosplayers were keeping the place alive. I grinned to know I was among my people, then headed to my hotel room to crash before an early morning.

The first panel was "Movie Production 101", co-hosted by James Rolfe, aka the Angry Video Game Nerd (AVGN). His co-host didn't introduce himself until several minutes into the panel and proceeded to do most of the talking, which was disappointing — but more surprising was that only a few dozen people were in the audience. I'd read that MAGFest had grown from only 300 attendees in its first year to 12,000 in 2014 — so where was everyone?

The answer could be found in my arrival the night before. This is a late-night crowd, and 10 AM was far too early for anyone to have crawled out of bed yet. When Rolfe hosted his second panel at 5 PM later that day, it was standing room only, with hundreds of people in attendance. I tried to get into Jon St. John's panel at midnight that night, and the line wrapped around the block. Prepare to shift your circadian rhythm if you want to get the full measure of MAGFest.

Next I enjoyed a presentation by Hank Chien, the current Donkey Kong world record holder. Chien emerged on the scene after the infamous rivalry between Billy Mitchell and Steve Wiebe was portrayed in the film King of Kong. Deciding being a successful New York City plastic surgeon wasn't challenging enough, he took up Donkey Kong and blew everyone away. Chien described his experience coming into this hobby, where and how he practiced, the strategies he used, how the press responded to his victory, and his appearances at Denver's three annual Kong-Off, most recently in November 2013.

During the Q&A, I asked Chien if he were to pursue a record in another game, what game would it be? He didn't envision himself playing anything else, but he admitted to enjoying Centipede, though he said he'd never be as good as current record holder Donald Hayes, whom I met at PAX East 2011. I chatted with Chien after the panel, getting his autograph for myself and for my friends who host the No Quarter podcast.

This arrived in the mail yesterday from my Open Apple co-host. Because @gamebits is one freakin' hoopy frood! pic.twitter.com/nOJbIURXaa

The next panel was shockingly fun. Voice actors Ellen McLain (Portal's GLaDOS), Jon St. John (Duke Nukem), John Patrick Lowrie (Team Fotress 2's Sniper), Matt Mercer (Resident Evil 6's Leon Kennedy), and Wes Johnson (various characters in Skyrim) told stories, took questions from the audience, read lines in various voices, and prank-called attendees' friends. I don't know what I was expecting, but I was laughing my head off. The panel went for two hours, but I had scheduled lunch with a local friend and had to leave the panel after the first hour. I thought I would've had my fill by then; I was wrong! I tried to catch these voice actors later at their autograph table — where, unlike Hollywood actors, they were't charging for their signatures — but the line was ridiculously long, and I didn't see that they were handing out glossies to autograph, and I hadn't brought anything else for them to sign.

I stopped into the AVGN's next session, but it consisted almost solely of Q&A, and the audience had no microphones. Rolfe heard the questions but didn't repeat them into his microphone, so I only ever heard half of each conversation. But just from that I could tell that Rolfe works best off a script, as he does in his game reviews; he's almost adorably awkward otherwise. I saw some footage of his upcoming feature-length film then cut out.

The next panel was "Promoting Good Gaming Community", which was once my responsibility as a CompuServe sysop in the Video Gaming Central forum. Communities still exist today in message boards but also in clans, guilds, and even Xbox Live Parties, and I enjoyed hearing the various methods moderators and community members can use to bring the quality of discourse up. I was pleasantly surprised to find Bob "Moviebob" Chipman on the panel — our paths hadn't crossed since dinner with Anita Sarkeesian two months ago to the day. He espoused Wheaton's Law and the value of shaming other people in the community but later clarified that shame is a tool best used by peers, never by those in power.

That was the end of my Saturday panels. I finished by entering a Retro Gaming Gauntlet video game competition of 8-bit NES games (via emulation), which held several surprises. Eighteen of us went up against Mike Tyson in the original Punch-Out!, and he downed many of us, including myself, in 18 seconds. Only one person lasted the entire first round. The next two games, I'd never played: Zombie Nation and North and South, both of which I quickly mastered. But after three rounds, the organizers culled anyone not in the top four, and my disappointing performance against Tyson eliminated me. I didn't stick around to see what games the finalists played. The Nintendo World Championships, this was not.

There was time for only two panels on Sunday before MAGFest was over, and maybe it was because I'd finally gotten a decent night's sleep, but I enjoyed these panels perhaps the most of any. Derek Alexander, aka the Happy Video Game Nerd, showed us how not to shoot a video game review. Now 29, Alexander showed us one of his first YouTube videos, a review of Splatterhouse, published in 2007, and paused it every few moments to criticize every aspect of it: his script, his set, his editing. I myself find anything I wrote more than five years ago to be crap, so I can appreciate how cringe-inducing this experience must've been for Alexander. I'd never seen any of his videos before, but his self-effacing humor and enthusiasm for the subject — as well as his encouragement for anyone who has ADD or ADHD as he does to get on medication — made me a fan.

Finally, I attended "Paging Dr. Mario: An Intensive Care Plan for the Wii U". The intended moderator was Chris Melissinos, curator of The Art of Video Games, but he called in sick, leaving panelist Joshua Lynsen to step up to the plate. He took the unusual approach of stepping into the aisle to address the panelists head-on. I was a bit distracted, as I occasionally left to attend Al Lowe's panel on the history of the Leisure Suit Larry franchise, but I enjoyed hearing from Lynsen's panel the enthusiasm for Nintendo's consoles and the confidence in Nintendo's ability to dominate the handheld space, even in the face of competition from smartphone devices. An actual checklist for what Nintendo can fix, though, I did not walk away with.

In between all these panels, I had plenty of time to explore the vendor space and arcade. Dozens of indie shops were selling used games, original art, posters, figurines, books, dice, and more. I desperately wanted to expunge all my cash on the awesome artwork and knick-knacks, but every time I stopped myself and asked, "What would I do with it?" That question guided me to buy Moviebob's book, Super Mario Bros. 3: Brick by Brick, from the Fangamer table, though absent from the table was Fangamer founder Reid Young, whom I'd interviewed a year earlier. The last day of MAGFest, I picked up some chiptune CDs at 50% off. That's all the swag I went home with.

The arcade consisted of far more coin-ops than I expected to find. A few were donated by the American Classic Arcade Museum of Laconia, New Hampshire, but others were on loan from local collectors. From classic uprights to rare cocktail tables to Japanese-style sit-downs, everything was available — even three Apple II computers, a Commodore 64, and an Atari 800. All the games were set to freeplay, an the arcade was open all day and night, accommodating gamers of any schedule and temperament.

Something noticeably absent from the "show floor" was any sort of developer or publisher space. There were no booths for Nintendo, Capcom, or Electronic Arts; and unlike at BostonFIG, where indies had a massive hall all to themselves, here they were crammed into a corner of the arcade. That's no oversight, as it's written right into MAGFest's charter:

There are no corporate sponsors, no over-crowded showfloors, and no top-secret-behind-closed-doors showings. MAGFest is built from the ground up to be a party-like atmosphere with focus on community and fan creations, which creates an environment that no other expo or convention can ever recreate.

MAGFest truly is a festival by gamers, for gamers, and no one else.

Despite music being right in the festival's name, I did not attend any concerts other than impromptu ones in the hotel's hallways. Most concerts tend to be at a decibel level that leaves me uncomfortable, and I've never found myself engaged in the mob mentality that makes such crowds enjoyable.

MAGFest is a smaller event than PAX East and one with a much different vibe. Most goers stay right at the hotel where the festival is held, allowing them to stay up all night without worrying about catching a subway or taxi home. Unlike a convention center, hotels are open 24/7, dramatically shifting the hours at which popular events can be held. At "just" 12,000 people, it's less claustrophobic and easy to bump into the same people over the course of the weekend. Tickets do not sell out and are in fact sold right at the door. There's no emotional baggage or conflict of morals over attendance. I wonder if this isn't how PAX began in 2004.

For these reasons and more, I enjoyed my time at MAGFest 2014, but I don't know that I would go again. As a Boston resident, there is no convention easier or more affordable for me to attend than PAX East. Although that event is much larger and potentially more difficult to navigate, it also offers almost everything MAGFest does and more. Only at one point in MAGFest were there two simultaneous sessions that interested me; that conflict is an hourly occurrence at PAX East, which offers an embarrassment of riches. With more professional networking opportunities, PAX East's demographic skews a bit older compared to MAGFest, where I often felt the oldest person in the room (despite being just shy of the average gamer's age of 35). PAX East and MAGFest also occur only 2–3 months apart, which is more often than I need my gaming community fix.

But depending on your preferred convention size and camaraderie, MAGFest could be exactly what you're looking for. I have nothing but good to say about MAGFest and recommend to any and all gamers.