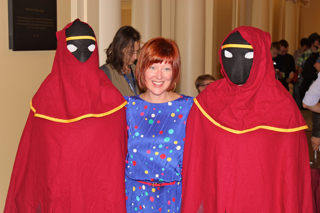 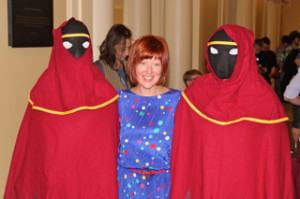 Despite being the second annual event, this past weekend's Boston Festival of Indie Games, or BostonFIG, bore little resemblance to its 2012 debut. Gone were the crowded classrooms in which a few dozen developers and a few thousand curious gamers were crammed; now the developers had an entire sports arena in which to entertain 5,000 attendees, with parallel tracks of speakers, lightning talks, and concerts spread across the MIT campus.

If anything, BostonFIG was too much of a good thing: it'd be generous to say I saw half the games on the show floor. That's still more than the budding developers participating in the day-long Game Jam, who were sequestered in their own building. Between the 60+ complete or near-complete games on display and the half-dozen Game Jams written in just six hours to the theme of "equality" BostonFIG 2013 offered an embarrassment of riches.

But what I did see, I enjoyed immensely, beginning with a thoughtful, inspiring keynote speech by Journey's brilliant designer, Robin Hunicke of Funomena. The creator of the game that proved not everyone on the Internet is a jerk encouraged budding developers to start with a feeling, and then create a game that is an expression of, and consistent with, that feeling. Indies may be best suited to do so, given their size, as I wondered how that notion would scale to larger teams, when different developers have conflicting feelings; even Hunicke admitted that working with other people is chaotic, since people by their nature accept sensory input, add feelings, and respond unpredictably.

Fortunately, Journey tends to evoke positive feelings and senses, as demonstrated by the Videri String Quartet, which opened Hunicke's keynote with an original arrangement of her game's score. The musicians and developer had never met, and each was more than a bit emotional over the other's work.

If you missed BostonFIG, you'll eventually be able to get your hands on all the event had to offer. The talks were recorded and I expect will be published to the BostonFIG website, and the games will be released when they're done. I picked ten games off the show floor to profile on Computerworld.com; please read that blog for gameplay videos and more. My photos of BostonFIG are available below.

All the above photos are published under a CC BY-NC license. Please feel free to distribute and remix for non-commercial purposes, with attribution linking back to this page. If you would like the high-res originals of any photo (especially if you are in one!), please contact me!