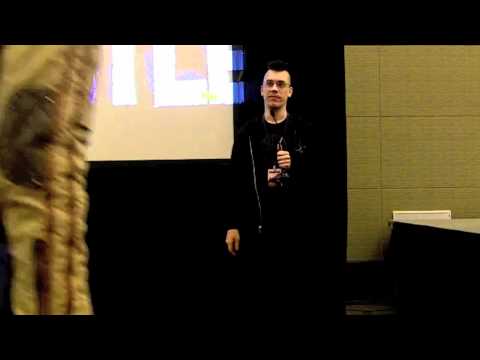 Jared Sorensen of Memento Mori Theatricks served as a human text adventure for the Parsely game of Action Castle at PAX East 2011.

At PAX East 2010, I was introduced to the concept of Parsely, a cross between Dungeons & Dragons and interactive fiction, the latter being the old-school text adventures we'd play as kids. Parsely turns those games into live-action entertainment that replaces the parser with a human interpreter. Though the interface is as clunky as always — GO NORTH, GET LAMP, and so forth — the results are far more hysterical and more conducive to group play.

I missed the Parsely session last year but bought my own copies of some of the scripts from Memento Mori Theatricks so that I could run them for an audience of retrocomputing enthusiasts. Wanting to be in the audience for once, I made sure to attend PAX East 2011's Parsely session. so I could be in the audience for once. Unfortunately, the first game that host Jared Sorensen presented was Action Castle, the same as last year's and the one I had run. It was still fun to watch, but the challenge for me didn't arise until that game was won and he dusted off the sequel, Action Castle II. I captured excerpts from both rounds in this YouTube video.

One thought on “Action Castle at PAX East 2011”