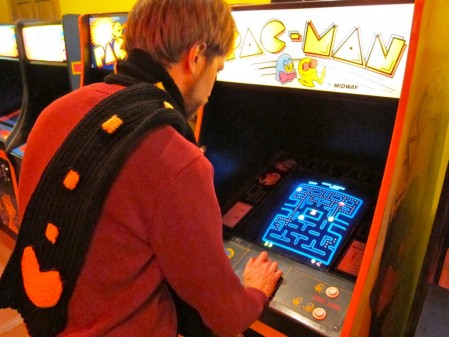 The American Classic Arcade Museum of Funspot in New Hampshire is hosting a fundraiser. Help preserve coin-op history by donating via Chip-In.

For nearly thirty years, I have been pumping quarters into arcade machines at Funspot. This vast entertainment complex, located in the Lakes Region of New Hampshire, has long offered amusements for all ages, from bumper cars to crane games to indoor mini-golf. But their largest attraction by far has always been their extensive collection of coin-op machines.

No longer modern, their collection is now retro, and intentionally so. Literally the world's largest arcade, Funspot has adapted itself into the American Classic Arcade Museum , the first non-profit organization dedicated to the preservation and play of vintage arcade games. Hundreds of machines, all still a quarter each, make this into a living museum, prompting nostalgia in its older visitors and education for its younger. The arcade has been featured in multiple documentaries, including King of Kong and Chasing Ghosts; it is host to the annual International Classic Videogame Tournament; and its wares are regularly transported to Boston for the enjoyment of PAX East attendees.

Now the museum needs your help. Despite the ACAM's considerable lineup of classic games, just as many are unable to be put on display, due to needing expensive repairs or a lack of space in which to present them. To overcome these limitations, the ACAM is holding an online fundraiser. Proceeds from this drive will allow Funspot to add a 5,500 square-foot expansion to the existing 7,500 square-foot game room, acquire the hardware and accessories needed to make the rest of their collection presentable, and present new displays commemorating the heyday of the arcade.

ACAM is a destination any gamer should treasure. With so few modern arcade games being developed, and most of them costing multiple dollars per play, the amount of enjoyment offered by ACAM is a bargain. My annual pilgrimage costs me only $20 (extended by a generous coupon) for an entire day of play, making a fundraiser seem a reasonable request.

More important, Funspot is a rare opportunity to be reminded of gaming's humble yet fun origins — of the potential for the medium, and of the goal that's supposed to be enhanced, not obscured, by the intervening decades' advances in technology. Just as fledgling programmers have much to learn from retrocomputers, so too can today's gamers and game developers benefit from familiarity with what has come before.

Funspot and the American Classic Arcade Museum are about more than just fun — they're dedicated to preserving an important part of America's history. Documentaries and emulators can capture only so much; to actually understand and be a part of this tale, you need hands-on experience. Nowhere else can you get that as comprehensively as at the ACAM. Gamers deserve for this institution to realize its vision.