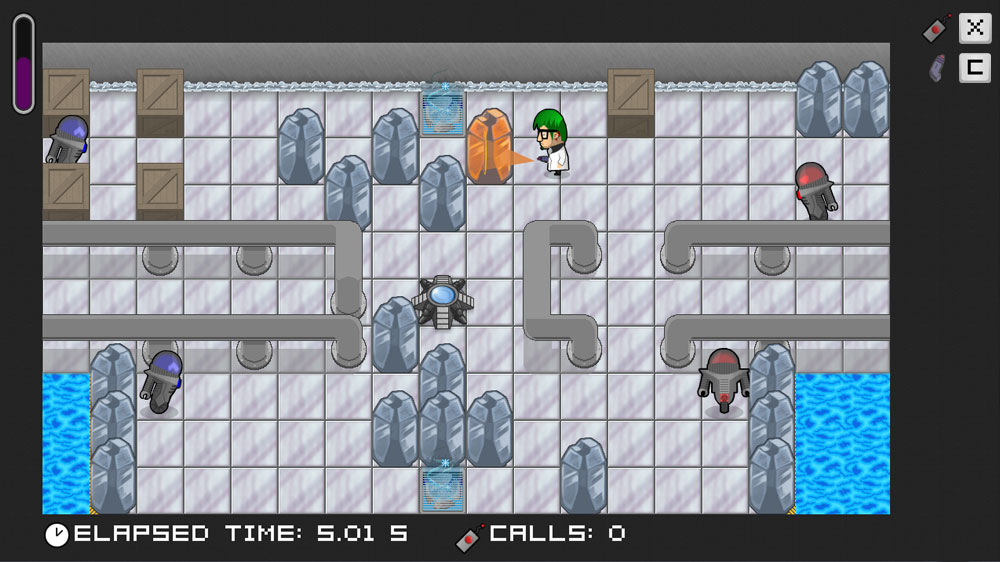 Return All Robots!, from Space Whale Studios and zirconMusic, is an Xbox Live Indie Game that stands out in the crowded puzzle genre.

Growing up playing Super Mario Bros. and Duck Hunt, I was accustomed to video games that challenged my dexterity and reaction times. It wasn't until I encountered Adventures of Lolo in 1989 that I discovered the medium's potential to make one think as well. Puzzle elements have since broken out of their own chess-like origins and into everything from Tetris to Resident Evil, requiring gamers to have both fast thumbs and clever minds. Few games appeal strictly to the thinking man like Lolo did.

An upcoming Xbox Live Indie Game and PC title is aimed specifically at that underserved audience. Return All Robots! from Space Whale Studios challenges gamers to direct robots, whose mobility is limited to linear movement — once a robot hits an obstacle, it stops. Some obstacles can be destroyed; others are lethal. Some robots are beneficent; others are malevolent. The players' scientist avatar must route the good robots to the escape hatch while avoiding their evil brethren.

If that's a complicated description, the above gameplay footage should clarify matters.

When I first saw Return All Robots! in action, I was overwhelmed by the number of variables and potential solutions. Even the first room struck me as hopelessly complex! But the more gameplay I watched, the more I got in the groove of what approaches are likely to work and what logical traps to avoid. Even better, the game reminded me significantly of the Super Nintendo puzzler The Brainies (known on the Apple IIGS as The Tinies):

One of the creative geniuses behind Return All Robots! is Andrew Aversa, a remixer whose work I've been following for years. Not only is he responsible for RAR!'s soundtrack, but he's supporting the very music community of which he is a member by encouraging them to remix the game's music. The Return All Robots! Indie Action-Puzzle Remix Contest invites musicians to submit their original takes on this nascent game's tunes to win the chance at being included on the soundtrack CD (with monetary compensation — very professional!), as well as copies of the game, the CD, and more.

The puzzle genre is crowded, but this entry looks stand out. Watch for Return All Robots! on your Xbox 360 for $3 (240 Microsoft Points) within the month.