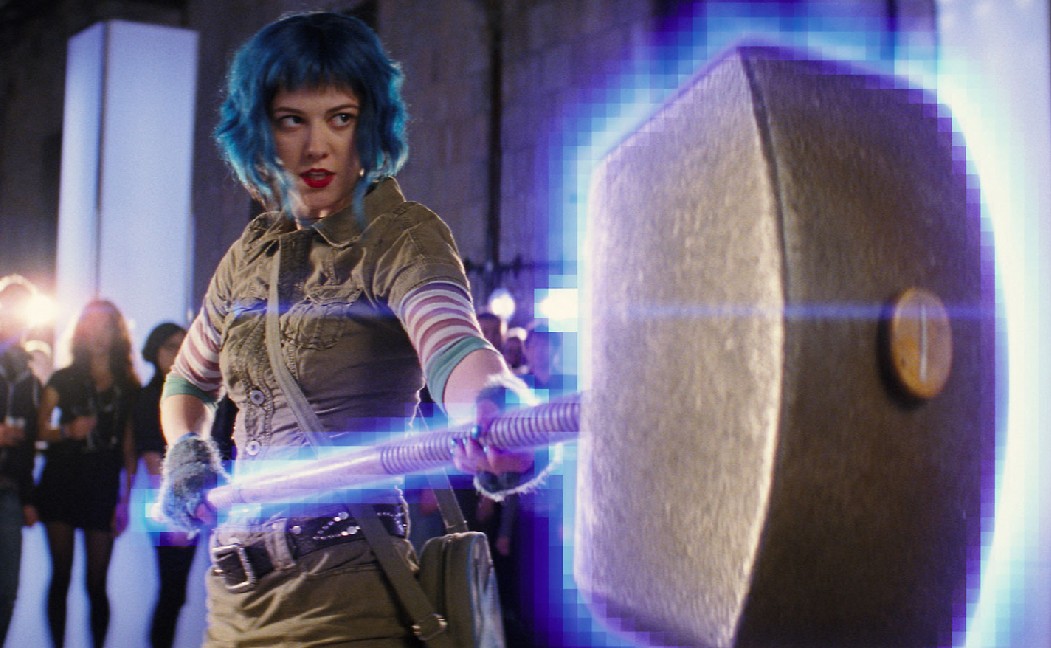 Scott Pilgrim vs. The World

Scott Pilgrim vs. The World might not be based on a video game, but it is the best ever adaptation of interactive electronic entertainment to the silver screen.

I watch a lot of video games. I don't watch many movies. I enjoy the unique combination of narrative and gameplay that games offer, yet few efforts to adapt popular games to the silver screen have preserved both elements, instead choosing to focus on a plot that doesn't stand up on its own.

Scott Pilgrim vs. The World may not be based on a video game, but it is the most critically successful adaptation of gaming structure to date, with plot, mechanics, humor, and a narrative that never slow down — just like an excellent video game.

On the surface, the movie's plot is part adventure game and part teen movie: Scott, an unassuming, unemployed twenty-something from Toronto, spends most of his time with a small and similarly awkward group of friends. The big news for him is his adorable high-school age girlfriend, Knives (possible allusions to Kitana of Mortal Kombat and Dagger of Final Fantasy XI) — but that new excitement is quickly overshadowed when he meets Ramona, an indie-punk beauty who just moved to town. He soon finds out, however, that if he wants to date Ramona he will have to first defeat her Seven Evil Exes.

When it comes to decent movies that specifically appeal to a gamer audience, there's Mortal Kombat and … well, there's Mortal Kombat. But after seeing it, I would immediately add Scott Pilgrim to that short list. It has the combination of action and humor that should make it an instant cult classic. It doesn't try to parallel any particular game — it makes noticeable references to Sonic the Hedgehog, the classic Mario games, any number of RPGs, and the combat styling of Mortal Kombat and Street Fighter. Some of the allusions are even more subtle — for example, Scott has to face off against twin Japanese men (yes, Ramona dated both of them!) to cross two more Evil Exes off the list — and what RPG lacks some kind of "twin" boss? Thunder and Storm from Earthbound, Volcanic and Blizzard Lord from Kingdom Hearts, Koume and Kotake/Twinrova from Zelda: Ocarina of Time — these are just the ones that I can name off the top of my head.

But the heart of this movie doesn't revolve around inside jokes and video game nostalgia — it can stand on its own merits, even for an audience whose last real gaming experience was wasting a quarter on two levels of Pac-Man in the local arcade. Michael Cera reprises the same kind of endearing, puppy-cute but eventually heroic character he perfected in such films as Juno, but with an added level of steel and some inexplicably flawless martial arts skill. Acting opposite the vivacious and sarcastic Ramona, with a relatively bland but amusing background of inelegant friends, the character combination is extremely effective. And despite the occasional teen movie feel, the audience is left wondering how things will get resolved until the last minutes of the film — an uncertainty that few movies manage well.

Just about any gamer or former gamer will find a lot, obvious and subtle, to enjoy about this film. And perhaps unlike even Mortal Kombat, you can even bring the non-gaming friends and family and expect them to like it, too — even if you may need to explain the concept of "experience points" later.