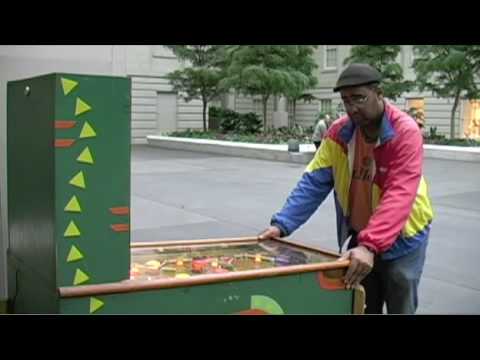 This weekend is the Northwest Pinball and Gameroom Show, being held June 11–13 in Seattle, WA. The expo includes 250 game machines set to free play; a speaker schedule that includes dozens of classic pinball designers, as well as modern stars Steve Wiebe and Walter Day; and an extensive pinball tournament.

Pinball is one of the earliest forms of arcade machines and presaged the societal ills that would be cast upon electronic entertainment: shortly after their invention in 1937, they were grouped with slot machines and were declared illegal in New York City — a ban that remained in effect until 1976. As coin-ops became more advanced, pinball nearly disappeared from arcades in the early 1990s. A pinball adaptation of the film version of the television series The Addams Family somewhat revived the genre with its innovative features and inviting gameplay, but pinball remains an element of the overall arcade industry that has been on life support for more than a decade.

Fortunately, the retro scene is alive and well. Enthusiasts enjoy the focused challenge of man vs. machine in a format that is easy to grasp but difficult to master, thanks to a combination of complex physics and pure luck. Collectors appreciate the mechanical components that can't be found in today's arcade games, giving them the opportunity to repair and retrofit the machines in their own basement. And historians recognize the impact pinball has had throughout the 20th century:

Beyond these brief online videos, I'm unaware of any extended work that gives pinball the recognition it deserves. An arcade documentary would include pinball but may still be more than five years away from release.

In the meantime, you don't need to know the history of pinball to enjoy the machines today. Head to the Seattle Center this weekend for a bank of games the likes of which you're unlikely to see anywhere else.