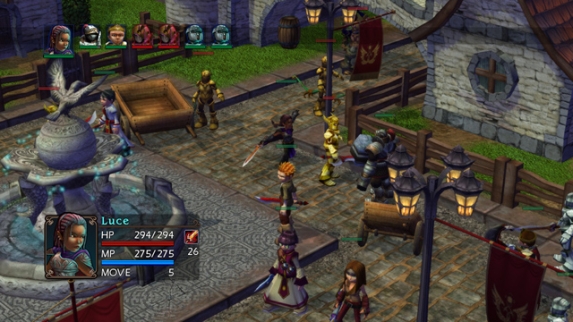 Konami has revived the tactical RPG genre with Vandal Hearts: Flames of Judgment for Xbox Live Arcade and PlayStation Network. Here are my first impressions.

Vandal Hearts II is one of my all-time favorite RPGs. I'm not usually a fan of tactical games and have earned much vilification for being the one gamer on Earth to have disliked Final Fantasy Tactics. But Vandal Hearts II earned sixty hours of my time, something I'm rarely able to devote to any single title but which this game warranted. The first Vandal Hearts, along with Wild Arms, were the games that convinced me that the leap from the Nintendo 64's cartridges to the PlayStation's CD-ROMs was warranted, and I was playing Vandal Hearts II well after the PlayStation 2 was launched. The series thus bookended my experience with the 32-bit gaming era, but I was eager for more.

So I was excited to learn in the past few years that Konami was considering reviving this decades-old franchise, and when news came last year that the form would be an Xbox Live Arcade and PlayStation Network game, I considered it my good fortune, as I'd just gotten an Xbox 360 a few months earlier. Yet no gaming site I followed seemed as interested in the title as I was. I checked them regularly but found updates rarely. Finally, Konami emailed me this week: Vandal Hearts: Flames of Judgment had been released on January 20th.

As I'm currently in the middle of three other games, including one RPG, I did not rush to purchase this title, but it was easy enough to move the demo to the top of my queue. The trial version of Flames of Judgment, supposedly a prequel of the game's predecessors, consists of two battles with some storyline in between. Having played only that much, I can offer only first impressions.

The most significant, or most immediately apparent, departure from Vandal Hearts II's battle system is the ability to change weapons in mid-battle. Heroes can attack from a distance with missile weapons, then switch to melee gear when the enemy draws close. Although many gamers will appreciate this versatility and realism, I don't prefer it. It's not that the system is inherently bad; few people complained that Final Fantasy VI's espers allowed every character to learn the same magic spells, for example, as doing so did not diminish the party members' unique attributes, such as Sabin's blitzes or Setzer's slots. But I did not expect to see such adaptability in Vandal Hearts. One of my favorite attributes of Vandal Hearts II was that each character was essentially a blank template, to be crafted into any sort of warrior needed: fighter, archer, mage, and more. Whatever the person's equipment was defined their purpose, which was fixed for the battle. What I've seen of Vandal Hearts: FoJ is that characters can more easily fill each other's voids should one fall, which for me eliminates some of the tension of battle.

Beyond gameplay and into mechanics, the animation style has taken a turn for the cartoonish, which doesn't match the game's mature themes and Teen rating. It also seems harder than I remember to adjust the camera to get a good view of the 3D playing field. Cinematic interludes feature voice acting, but the game's main dialogue is presented via text — unusual for this generation of RPGs, but not for a 500-megabyte download.

It's been more than a decade since I first played Vandal Hearts II, so my memories and expectations may both have been distorted by time. Even if not, it's unfair to expect a franchise to remain unchanged over so long a period. Either way, I'm not sure Vandal Hearts: Flames of Judgment will draw me into the tactical RPG genre the way its predecessors did.