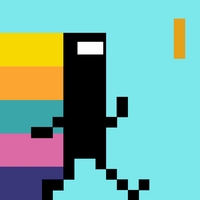 BIT.TRIP BEAT was published as WiiWare this spring, the first of a trilogy of Atari 2600-themed music games that was followed by BIT.TRIP CORE and, on November 23, BIT.TRIP VOID. These games, like Rez, incorporate action and rhythm so that the soundtrack is directly influenced by your performance — but few gamers have played so perfectly as to hear the full, unmodified soundtrack.

That barrier is now removed with publisher Aksys Games' release of the BIT.TRIP BEAT soundtrack. Unlike World of Goo, this album isn't free, but is instead available for purchase and download from online retailers Apple Podcasts and CDBaby. On both services, each of the tracks is $0.99, but the complete album's price varies: $9.90 on iTunes, or $5.99 on CDBaby. Additionally, CDBaby comes without digital rights management, or DRM.

Half the tracks are very short, ranging in length from eight seconds to 35. Since both sites charge $0.99 for even these short riffs, it's best to avoid purchasing them separately; get them only with the entire album. If you're buying only the five longer tracks, then you're already spending as much as CDBaby charges for the entire album, so you might as well go whole-hog. That same $6 could also get you any one of the three BIT.TRIP games, though!

If neither of these options appeal to you, the publisher's official blog states that the soundtrack "should be available on Amazon, Rhapsody, eMusic, Napster, and a slew of other music retail services on 10/27/09 as well" — though a quick search on those sites does not yet reveal any hits.

An eleventh track, "Desention", is available for free from the publisher's Web site. And if you want even more music from this genre (known as chiptune), might I recommend 8 Bit Weapon?