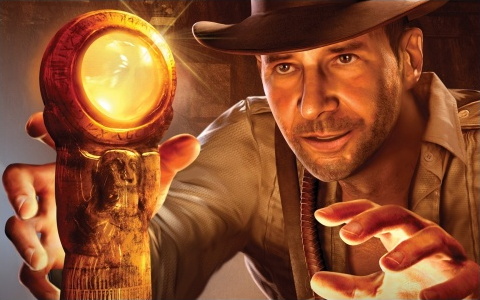 Two decades-old heroes who returned to the silver screen in 2008 will be reappearing in video games in 2009, this time without LEGOs.

First up is Indiana Jones in The Staff of Kings, as seen above. To the best of my knowledge, the last Indiana Jones game was The Emperor's Tomb, which was released in 2003 and based on the Buffy the Vampire Slayer game engine. Though I never finished that Indy outing, I have fonder memories of it than I do of his previous Nintendo 64 game. I'm looking forward to continuing this upward trend with a more successful revisit to the franchise than last year's film.

The Staff of King's Wii version, and only the Wii version, will include the Indiana Jones' 1992 adventure, The Fate of Atlantis. Of course, if you have the original computer version of that classic game, you can already play it on your Wii, courtesy ScummVM and the Homebrew Channel.

The other hero swinging onto the TV screen is the Dark Knight in Batman: Arkham Asylum:

Batman's interactive experiences have generally gone the way of Sonic the Hedgehog, both of them having promising beginnings that quickly slumped into shame. The Caped Crusader's 8-bit NES debut was the best yet, whereas his 2003 game, Dark Tomorrow, was more a dark morass. Could Arkham Asylum be any worse? At least it is capitalizing on the recent films' successes without necessarily relying on them. I'm not a fan of Christian Bale, so I'm glad to hear the game's main hero and villain have the right voice actors for the parts.