Sega announced today the spring 2009 release of Sonic's Ultimate Genesis Collection, which has not only six 16-bit Sonic games, but at least 34 other games from the Sega Genesis. A complete list is available at their Web site and includes Golden Axe I-III, Phantasy Star II-IV, Streets of Rage 1-3, Shining Force 1-2, and several others. As much as I love the Virtual Console and its ilk, paying $40 for such a comprehensive package is far preferable to being nickeled-and-dimed to death at $5-10/game.

The Ultimate Genesis Collection also offers a feature not found in a pure emulator: Scale2x, a "real-time graphics effect able to increase the size of small bitmaps guessing the missing pixels without interpolating pixels and blurring the images." That means that graphics can be upgraded on-the-fly to be smoother and less pixelated. As an example, observe this before-and-after comparison of a scene from Sonic & Knuckles, one of the many games on the disc: 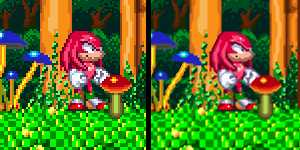 Purists need not worry, as this upgrade filter is optional and can be disabled.

In my heart, I'm a Nintendo fanboy, and though I'm more cosmopolitan now, in my youth, I eschewed anything without the Nintendo Seal of Quality. That focus has robbed me of the history and nostalgia necessary to fully appreciate a collection such as this, but it is nonetheless a great offering to Xbox 360 & PS3 gamers everywhere.