Last week saw the release of two Balance Board-compatible WiiWare puzzlers: Tetris Party and The Incredible Maze. Thanks to brand recognition, the former needs no selling, so let's take a look at The Incredible Maze (there are some who call it… TIM), published by Digital Leisure, a company better known for their re-re-releases of laser disc games Dragon's Lair and Space Ace.

Labyrinth, the old wooden toy (the kind we had when I was a kid, back before everything needed batteries!), is defined in Wikipedia as a game "where the object is to try to tilt the playing field to guide a marble to the end of a maze, without letting it fall into any of the holes." And that's exactly what TIM is. Rather than control the ball itself, as in Super Monkey Ball, players tilt the playing surface. It's a minor, but important, distinction. TIM has 30 mazes, which may not seem like much, but it's about right for the $5 it costs to download. Early levels follow a single path from beginning to end, while others are true mazes. Fortunately, the camera can be pulled back for a broader view of the playing scape, then drawn back in for finer detail and control.

The basic gameplay puts you at one end of the maze with the exit at the other. Falling through any one of the many holes increments an "attempts" counter before replacing you on the board near where you fell. I don't mean to say this game needs to be harder, but it seems a trivial penalty for falling through a hole. No matter how many times you fall through a hole, you can continue on your merry way. It rather lessens the motivation for a flawless run. 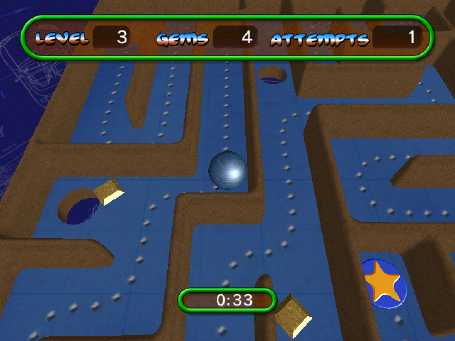 Collect all the gems in TIM's Challenge Mode.

By contrast, I have the opposite complaint for Challenge Mode, which is unlocked after you finish the regular board. In Challenge Mode, you are required to collect gems scattered about the course before making your way to the exit. Should you fall through a hole, your and the gems' positions in the maze are returned to their original positions. The titular challenge then becomes not just to collect all the gems as quickly as possible, but to do so without dying once. Though it's a bit extreme, I can allow it… so why can't the game? Every time you die and are returned to the maze's entrance, it's like starting anew, right? Yet though your trial is reset, the timer is not. To get a truly low score, you need to complete the maze on your first and only try. If you fail, your next step should be to call up the menu and choose to restart. Even doing that is a pain, as menu navigation requires pointing the Wiimote at the screen, even though gameplay is performed with the Wiimote held sideways. Why not let the D-pad be used for selecting menu items?

That's just the tip of the game's control issues. Tilting the Wiimote to tilt the board is a logical correlation, but the sensitivity is off the chart. The slightest nudge in any direction sends the ball careening around the board when what you need is to gingerly edge your way past the pits. I thought I was supposed to be battling the game, not its controls, but apparently I need to keep an eye on both. The only setup that brought me success was to perch my elbows on my knees and hold the Wiimote at eye level, carefully monitoring both its and the game board's movements and the synchronization between the two. Fun? Not really.

It gets trickier. A flick of the Wiimote launches the ball into the air — a necessary maneuver to jump over some dead ends or to take shortcuts. It's not apparent which walls can be jumped over, or if the height of the jump is determined by the severity of the flick. Since controlling the board's tilt is already too sensitive, adding the jumping maneuver to the Wiimote's motion-sensing portfolio is unnecessarily complicated.

You'd think, given this extreme sensitivity, that The Incredible Maze's invitation to play using the Balance Board would be sadistic. Surprisingly, the game's control is much finer with this Wii Fit accessory. I found myself able to move the ball more slowly and accurately around the maze and its pitfalls, making me wonder if a calibration option was intended for the Wiimote but simply overlooked. After watching the ball imitate Sonic bouncing off the walls with the Wiimote, the Balance Board was a nice change.

Unfortunately, in the end, this $90 peripheral isn't enough to save TIM. When a new retail game can cost up to $60, having more affordable alternatives available for immediate download is a relief. Expectations should be appropriately scaled for a $5 game like TIM, but I think it's fair to expect the controls to work. Designing a successful game can be a labyrinthine challenge, but if there's one thing the Wii has taught us, it's that gamers will buy a game with mediocre graphics and great gameplay, while great graphics and mediocre gameplay won't go far.