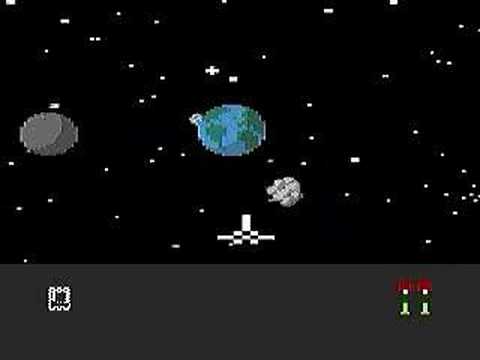 Coming soon to an Xbox 360 near you: Atari 2600 games. It appears that the former Infogrames, which has been using the Atari name since purchasing Hasbro Interactive in 2001, will be remodeling classic titles and packaging the old and new versions for Xbox Live.

Atari has had a rough few years and has sold off many of its newer properties. Just as the company was quick to abandon the name Infogrames and rely on brand recognition, this latest move is consistent with cashing in on Atari's heritage — but no maneuver can be as effective and memorable as the Atari of three decades ago. 1UP.com has a video gallery of the thirty "The Best, Worst Atari Commercials", which sure does bring back memories: I'd forgotten just how awful the home version of Pac-Man was. It wasn't all bad, though, as represented by this stylized montage:

I sometimes find myself longing for that era, despite the crude graphics — or perhaps because of them. In Understanding Comics, Scott McCloud outlined how the more generic an avatar's features are, the more conducive it is to player identification. That is, today's protagonists have clear personalities and representations: you're not playing as yourself, but as Master Chief, Tommy Vercetti, or Harry Mason. But, as Next Generation recently pointed out in an outline of the 50 greatest game design innovations, "The first adventure games, and most other computer games too, described the world as if you, the player, were actually in the game—not a representation of you, but you. Consequently, the games could make no assumptions about your age, sex, social position, or anything else". That blank slate made it easy to insert yourself into the Atari's nascent virtual worlds. As any fan of the Metal Gear Solid series will tell you, the proliferation of cutscenes means better storytelling, but less player interaction.

Are games and movies true melding? Or is one simply transforming into the other?

One thought on “Atari Lives”